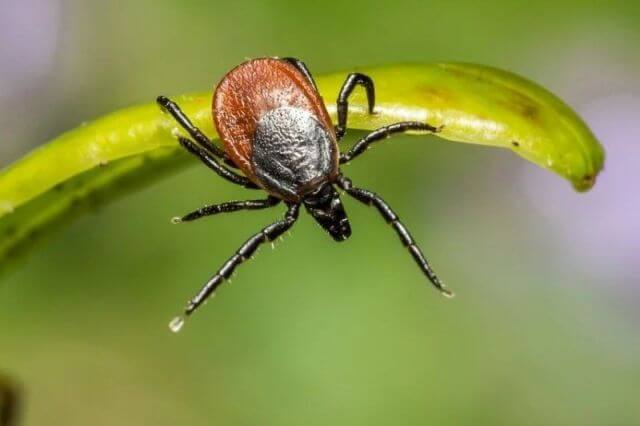 Ticks (Ixodida) are tiny parasitic arachnids found all over the world. They prefer warm, humid habitats. Around 900 species of ticks are known worldwide. All species must consume blood, and all vertebrates, including humans, can be used as hosts. Many species of common ticks are carriers of dangerous diseases, infecting tens of thousands of people every year.

Common Ticks in North America Include:

The Life Cycle Of a Tick

The lifecycle of a tick has four stages; egg, larva, nymph, and adult. Ticks require one or more blood meals to develop into the next stage, except in the first stage. In the last stage, they need blood to produce eggs.  In each of these stages, ticks can transmit diseases.

The American dog tick, also known as Wood Tick belongs to the hard ticks. The tick species is native to the US and occurs mainly in the eastern two-thirds of the country. The main host of adult ticks is dogs and other larger animals, occasionally humans.

They are brown to reddish-brown in color with silver or grey markings on their scutum (dorsal shield). Females vary in size and are slightly larger than males.

American dog ticks are commonly found in forests, shrubbery, and grassy areas but also along trails and roadways. They are mostly active during spring and summer (from mid-April to early September).

Adults of American dog ticks parasitize on dogs or other mammals. American dog ticks find their host by a behavior known as “questing”. In this behavior, a tick crawls on the blade of grass, leaf or vegetation. It stretches its clawed limbs and when a host passes by, it simply hangs on to the host.

American dog ticks commonly prefer dogs as hosts, but occasionally bite humans too. They are also known to bite other mammals such as cattle, horses, sheep, etc. Larval and nymphal stages also infest small rodents, cats, skunks, and opossums, all contributing greatly to the spread of ticks.

It transmits Rocky Mountain spotted fever and Tularemia. It can also cause canine tick paralysis.

The Lone Star Tick is also known as the turkey tick or as the northeastern water tick.

The female Lone Star Tick is easy to recognize, it is a brown tick with white a spot. The lone star is located near the center of the female’s back. Male Lone star ticks are brown in color and have streaks or lines on the edges of the top part of the body.

Lone star ticks are three-host ticks i.e. they feed on different hosts during larval, nymphal, and adult stages of their life cycle.

The bite of the lone star tick is painless, depending on the stage of its development, it can remain on the host for up to seven days until it is full of blood, then it falls off.

Where are lone star ticks found:

The species is widespread in the east, southeast, and the midwestern US. Lone star ticks are found in woodland areas and transitional zones such as between forest and grassland ecosystems. They like to sit on high grass, where they wait (questing) for a suitable host.

Adult lone star ticks become active as late as May in North America. The nymphs and larva become active in spring to early summer or late summer to fall.

The primary host for the mature lone star ticks is white-tailed deer. These ticks can be found on humans, domestic animals (dogs, horses, cattle, and goats), turkeys, hare, opossums, squirrels, and large wild animals (e.g. coyotes).
Adults feed on large or medium-sized animals. Larvae are found on birds and mammals.

Gulf Coast ticks are also very widespread, parasitizing a variety of birds and mammals, particularly small rodents. But they also bite humans if the chance arises. These tick species are known to transmit Rickettsia bacteria to humans and animals. In humans, bacteria of this genus can cause Rocky Mountain spotted fever.

Females have a dark brown back with silvery-white ornamentation near the head. Males have silver lines on the back.

Gulf Coast ticks live in grass prairies and shrub vegetation along the Atlantic gulf coast and the Gulf of Mexico, thus the name.

As typically for most types of hard ticks (Ixodidae ), they sit in the undergrowth and wait (quest) for a suitable host, although they are not too picky. During questing, a tick sits on the top of a plant or leaf blade and extends its front legs. When a host passes by, the tick attaches to the host’s skin.

Gulf Coast ticks attack all sorts of large mammals whether it is horses, cattle, sheep, deer, wolves, bears, or dogs. Larval and nymphal stages parasitize on small mammals and birds. Immature stages feed on the head and neck region of their hosts. Adults concentrate on the external parts of the host’s ear.

Gulf Coast ticks transmit Rickettsia bacteria to humans and animals. Its symptoms include fever, headache, and a maculopapular rash. It is also responsible for transmitting heartwater disease, rickettsiosis, and tick paralysis.

It is a hard-bodied tick and is commonly known as the deer tick or black-legged tick. It parasitizes on many different animals and birds and transmits diseases. The larvae and nymphs of the species prefer small rodents and birds, the adult ticks usually infest large mammals. Adult deer ticks measure about 3 to 5 mm and are dark brown to black in color. Female deer ticks are orange to red color behind the scutum. Nymphs are about 1 to 2 mm in length.

Where do deer ticks live?

Like most shield ticks, the deer tick lives on the ground and in the undergrowth between bushes near grassland and woods where it is shady and damp.

Deer ticks are found all along the eastern US, up to the northern Midwest of the United State as well as southeastern parts of Canada.

Deer tick nymphs are active in spring and summer. Adults are most active in fall. Females attach to the host and feed on blood for 4 to 5 days. When engorged, it drops off and overwinters in the leaf litter on the forest floor. They can be active even after a moderate to severe frost.

The deer tick is a vector for several diseases such as Lyme disease, Powassan virus disease, babesiosis, anaplasmosis, and ehrlichiosis.

The brown dog tick or kennel tick is originally from North Africa. However, it has spread almost all over the world and is now common in almost every country. It has adapted very well to cold climates, where the Brown dog tick can complete its entire life cycle both indoors and outdoors which is unusual as compared to other ticks. It can feed on a variety of mammals but dogs are the preferred host.

They are reddish-brown in color with an elongated body shape. The body size of female brown dog ticks increases a hundred-fold during feeding.

Brown dog ticks prefer warm and humid climates but can tolerate low humidity inside the homes and kennels. It commonly occurs around human settlements. It infests homes, dog kennels, and animal pens. They have a strong tendency to crawl upward and can be found behind curtains and in furniture.

The adult female feeds on the host for about one week and then drops off to lay eggs. The eggs are laid in cracks, crevices, or garages in the house. Brown dog ticks are found in climate-controlled environments at any time of the year. But, its activity is at a peak in late spring to early fall.

Dogs are the primary and preferred host for brown dog ticks in the US. They usually attach to the head, ears, back, and between toes of the dogs. Other hosts include domestic animals, deer, rodents, and humans.

The importance of protection against ticks and tick bites

Due to the increasing spread of ticks and also the ever-increasing percentage of ticks that carry dangerous pathogens, tick protection measures are more important than ever. Ticks can transmit diseases such as tick-borne relapsing fever, tick paralysis, Lyme disease tularemia, and many others.

The inconvenience and suffering that is caused as a result of tick bites and transmitted illnesses are quite considerable. Also, the economic consequences cannot be foreseen if you are ill for a long time or become unable to work.

In retrospect, one says, one should have been more careful. Especially when it comes to ticks, it is always better to be safe than sorry. Defense against ticks and tick bites consists of preventive behaviors and the use of tick repellants.

And it’s not just people who are tormented by ticks, our pets, dogs, cats also suffer very badly from ticks. Here too, only regular control and preventive measures help. Farm animals and livestock are also affected to a large extent and the economic losses can be enormous if preventive measures are neglected.

Protect yourself from ticks through the following