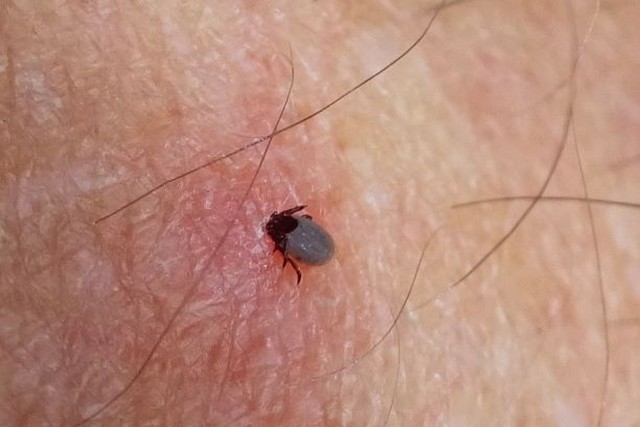 A tick looks like a tiny spider-like animal with a small round body and eight legs. Ticks are ectoparasites, living on the skin of a host. They do bite a host to drink blood which they need to grow and reproduce. Ticks can be carriers of a number of dangerous diseases that may spread to both humans and animals.

A tick bite is easy to recognize as such as long as the tick is still attached to it. It looks like a small foreign body that appears to be stuck in the skin. The longer the tick feeds, it will swell up to the size of a pea. When full, it falls off and only a small, red puncture wound can be seen. 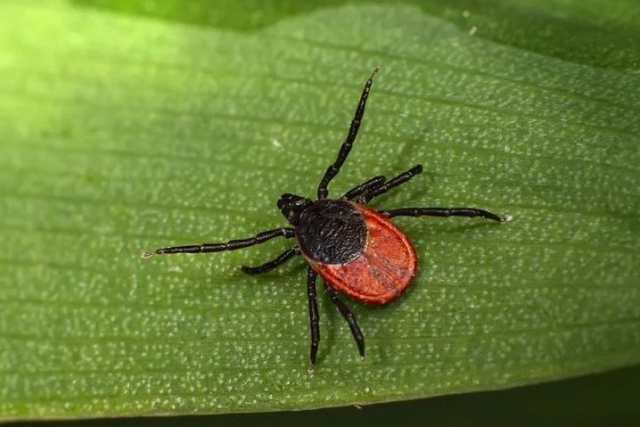 Ticks belong to the spider family  (arachnids) as you can see on the eight legs of an adult tick. Insects only have six legs and many species have wings too.

There are over 800 species of ticks known worldwide. Almost all ticks belong to one of two major families, the Ixodidae or hard ticks, which are difficult to crush, and the Argasidae or soft ticks.

Ticks go through different stages of development. At each stage, they will need at least one meal of blood to progress to the next stage. 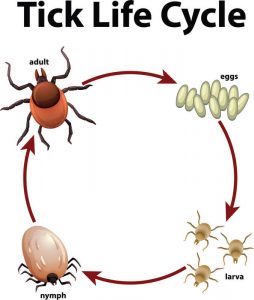 The development of a tick begins when a Larvae hatches from one of the numerous eggs laid by a female tick. The larvae with a size of less than half a millimeter can hardly be seen with the naked eye.

All a tick larva does is sit and wait for a suitable host to come close enough, it can be a small animal or a bird. When it has successfully transferred to a host it looks for a bite site, pierces a hole in the skin, and begins to feed. After this first blood meal, the larva leaves its host and molts into a nymph.

The sexless Nymph can spend months or years free-living in the undergrowth waiting again for another host and for another blood meal, after which again it will detach itself from the host. Depending on the tick species it may go through several nymph stages before it molts into a sexually mature adult tick.

The Adult tick will again sit and wait for a host. This waiting actually is known as “questing”.  Ticks seem to live a boring life as they spend most of it questing on the ground, in the undergrowth, on shrubs or grasses.

The female Adult tick needs the blood of the host to produce up to 3,000 eggs. A full-bodied female tick weighs almost 200 times as much as a hungry tick. To take up so much blood may take the female tick up to 10 days before voluntarily leaving her victim. The male tick can fertilize the eggs of the female without any further blood meal. 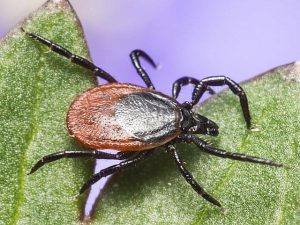 The tick belongs to the arachnids, its physique resembles that of a spider. However, only as a nymph and adult does it have eight legs, as larvae ticks only have 6 legs. Therefore, in this phase, it can be confused with other bugs and insects that look similar. However, if you look closely or use a magnifying glass, you can see the tick’s mouth and biting tools.

Ticks usually sit waiting on blades of grass or low twigs, waiting for a host. Wen latched onto a host then crawl around until they find bare skin where they bite and stay for 1 to 2 weeks until they are engorged with blood.

Tick Bite – What Does A Tick Bite Look Like?

The tick bite is actually not a bite but a small puncture wound. As long as the tick is still attached, it is obviously easy to recognize as a tick bite.

When the tick is done feeding, which can take a couple of days, it will just fall off. The tick bite then looks like a tiny puncture wound in the skin.

If it does not become inflamed or other wound complications occur then it usually heals quickly. The bite site must be observed for infection or any other complications.

How Do Ticks Feed?

When a host is found, the tick may walk around for a couple of hours until it finds a suitable bite site. It then cuts through the skin with its jaw claws and anchors its “harpoon-like spike” (the hypostome) into the wound. The small wound cuts capillaries from which blood flows, a tick is a so-called pool feeder. Before taking blood in, the tick releases a saliva secret, which contains several important components.

While feeding blood from its host, the tick regurgitates indigestible food residues into its host at regular intervals. In this process, pathogens that may have been contracted from a previous host and which have been preserved or even multiplied in the body of the tick can be transferred to a human.

The infection does not happen immediately, but the longer an infected tick is feeding, the higher the risk of contracting a tick-transmitted disease becomes. Lyme disease contraction, for example, takes about 6 to 24 hours after the tick bite. Therefore, fast and careful removal of a tick is urgently recommended.

The development stage of ticks also has an influence on the risk of infection. A tick in the nymph stage contains ten times more pathogens than an adult tick.

Remove the tick as soon as possible

If you notice a tick bite you should remove the tick as soon as possible.

Grasp the tick at its front end as near to the skin as possible, without squeezing its body, pointed tweezers or a special tick hook, special tick hook are best, and carefully pull it out. When twisting while pulling the tick out, which is often recommended, there is a slightly higher risk of parts of the tick breaking off.

If you don’t have a special tick tool, try to pull it out with your fingers but be careful not to squeeze the tick. 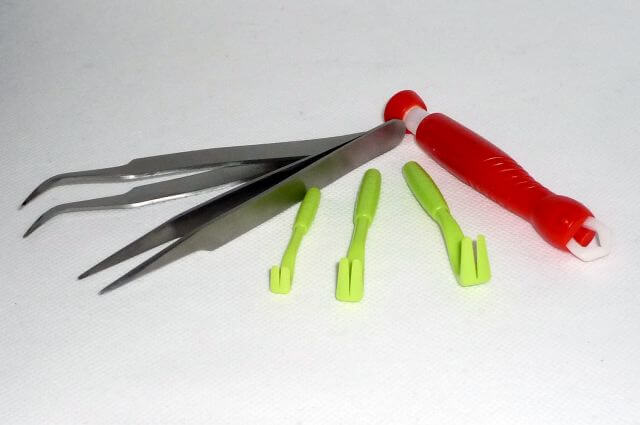 If parts of the tick remain in the skin when you try to remove a tick, don’t panic. This is not the head but only remnants of the hypostome (parts of the mouth). With regard to the transmission of pathogens, the remaining tick parts hardly pose a risk. The parts of a tick that remain in the skin are rejected by the body within a few days.

Trying to get the tiny part out of the wound only enlarges an otherwise small, harmless wound.

Tick-transmitted diseases are dangerous and can be difficult to treat. Preventing tick bites is much easier than lengthy treatment. Precautionary measures, protective clothing, and effective tick repellent offer the best protection!