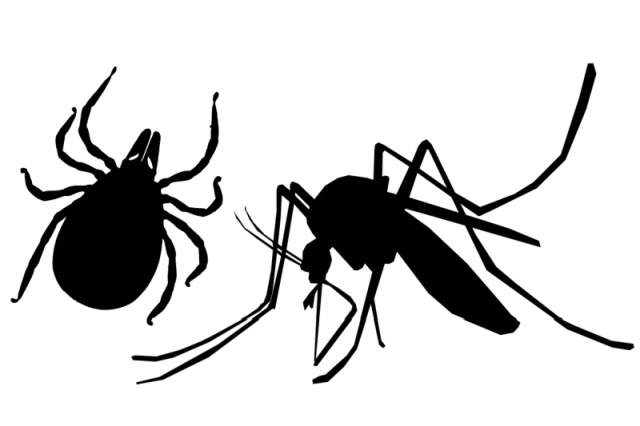 When directly comparing Picaridin vs DEET, DEET seems to provide slightly better protection but comes with the downside that it may have a few more side effects.

Whether you use Picaridin or DEET, remains a personal choice, weighing up risks against benefits. In any case, the fewer ticks and mosquito bites you get, the lower the risk of contracting tick- or mosquito-borne diseases.

Effective protection against ticks and mosquito bites is best achieved with a combination of effective insect repellents combined with protective clothing.

Insect repellents consist of one, or a mixture of chemical compounds. These must provide insect repelling properties strong enough to reliably ward off parasites. Two of the most effective synthetic substances that repel insects are Picaridin and DEET.

The two chemicals are used in various concentrations in many bug repellents, depending on the degree of effectiveness desired. Both substances are reliable and have been used for many years.

However, as with anything that has an effect that is desired, there can sometimes also be undesired side effects that may even be harmful to your health. Read here about the pros and cons of Picaridin vs DEET.

How do Repellents keep ticks and mosquitoes off?

In order to understand how bug repellents work, you first have to look at how the little pests find their victims.

Whether you’re using Picaridin or DEET, both insect repellents work the same way. They work by creating a “protective shield” over the area of skin they’re applied to. Applied generously over the body, the blood-sucking pests such as ticks, mosquitoes, black flies, and horseflies simply no longer smell their host.

The protective effect against ticks lasts about four to five hours, depending on the concentration of the active ingredients, against mosquitos protection can last for as long as 8 to 10 hours. However, those are just estimates as there are many other factors that determine how long the protection lasts. Besides the concentration of the active ingredient, the actual amount applied, the type of insect, environmental factors such as temperature and humidity, and how much one sweats plays a role too.

Picaridin is a chemical compound from the group of piperidines. Picaridin is used as the active ingredient in many bug repellents to prevent bites and contracting infectious diseases.

It is effective against mosquitoes, ticks, sand flies, gnats, fleas, and many other insects.

Depending on the formula, repellents containing Picaridin provide protection for 8 to 10 hours against most mosquitos and up to 5 hours against ticks.

To the human nose, Picaridin is virtually odorless. Other properties that make it user-friendly are that it is not greasy, does not attack plastics, and is generally considered to be well tolerated.

Side effects of Picaridin

Do not use products containing Picaridin if you have hypersensitivity to the active ingredient. This may show that after putting repellent on that contains Picaridin, the skin area begins to itch, redness may develop, or in very rare cases dry skin and flaking. However, side effects and skin irritation rarely occur in Picaridin, as the active substance is considered to be well tolerated even if used regularly.

When applying, take care not to get the product on open wounds or near mucous membranes. Be careful in the face too and avoid contact with eyes. If you use sprays, do not inhale the mist.

N, N-diethyl-m-toluamide – DEET for short – is a highly effective and reliable insect repellent.

It repels insects by irritating their senses so mosquitoes, sand flies, ticks can not sense the presence of humans.

DEET is well studied and its effectiveness is proven in 5 decades of use. trials. Protection depends on the concentration of the formula and is up to about 10 hours against mosquitoes and up to 5 hours against ticks.

In general, DEET is considered to be well-tolerated, it is used by millions of consumers annually. Adverse side effects are very rare but can be serious in some individuals.

Side effects of DEET

DEET is highly effective, it provides long-lasting protection and works against a wide range of biting insects.  Its effectiveness comes at the price of a slightly higher risk of side effects.

In certain cases, DEET may cause skin irritation such as redness and a burning sensation. These side effects usually occur only with frequent use or especially with improper use of DEET. Sensory irritations such as tingling sensation and numbness have in rare cases been reported. This is due to the fact that DEET can be absorbed through the skin and can have unwanted side effects on the nervous system. In severe cases, DEET can cause seizures and brain damage.

However, when used according to the instructions, the EPA considers DEET safe to use to prevent tick and mosquito-borne diseases.

As the active substance irritates the eyes and the mucous membranes as well, it should not come into contact with them like picaridin.

Since DEET reacts with certain plastics and leather, it should not come into contact with items such as sunglasses, plastic bottles, leather shoes or bags, etc.

As an expectant mother, protecting your baby is your top priority, so is the protection of your own health as this directly affects the baby. Some tick or mosquito-borne diseases can be a risk to pregnant women and unborn babies. When using repellent to reduce the risk of such diseases you have to balance risk versus benefit.

Studies on how the use of repellents affects the unborn are rare. This is no wonder because tests on pregnant women are critical for obvious reasons. Information is collected from animal experiments.  The use of Picaridin has so far not shown any damaging effects. Using DEET when pregnant is of similar concern. There is not enough evidence yet, so this drug should also be used with great care.

During pregnancy, you should use products containing Picaridin or DEET only after consulting with your doctor and if you are at an increased risk. Find more information on the Centers for Diseases Control and the Environmental Working Group links about the uses of repellents.

Both Picaridin and DEET containing insect repellents provide reliable protection against ticks and mosquito bites and can reduce the risk of contraction diseases.

Picaridin is better tolerated by the body with potentially fewer side effects than DEET and may be considered as the drug of choice in malaria-free areas. Repellents using DEET have the advantage that their protective effect has been studied for longer and it is more about the product and its side effects. In areas prone to malaria, the use of DEET is often recommended because it is highly effective in repelling all sorts of daytime and nighttime mosquitoes.

When comparing Picaridin vs DEET, it is hard to say if one is better than the other. Both are very effective in repelling biting little creatures. But keep in mind, even the best insects repellents can not completely prevent tick and mosquito bites. Other measures such as bright, long clothes to cover up and mosquito nets when sleeping can help to keep annoying pests away.