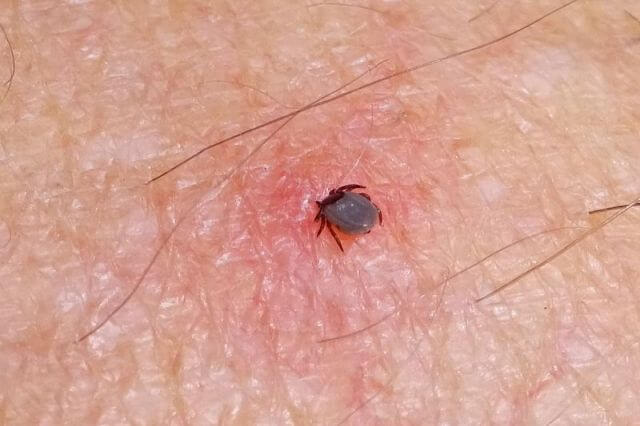 If you notice that you have been bitten by a tick, you should remove it as soon as possible. The longer the tick remains in the wound, the higher the risk of transmitting diseases. Unfortunately,  occasionally a part of the tick breaks off during tick removal, and the head apparently remains stuck in the wound. But how to tell if tick head is still in skin and how to get a tick head out?

How to tell if tick head is still in skin?

When the tick has been pulled out correctly and completely, nothing should remain in the skin. All you should see is a small, sometimes slightly bleeding, tiny puncture wound.

Unfortunately, despite all care and efforts, part of the tick may tear off and remain in the wound. But how to tell if tick head is still in the skin.

In this case, you would notice a small foreign body still stuck in the skin similar to a tiny wooden splinter or to the tip of a plant thorn.

So after pulling the tick it out, make sure to inspect the wound if anything is still stuck in it. Just as important as inspecting the wound, is to inspect the tick. If you look closely, and nothing has been broken off from the tick, you should see mouthparts that resemble a small protruding sting.

What to do if tick head is stuck?

Strictly speaking, it is not the head of the tick that is stuck in skin, but only its mouthparts, the so-called Hypostome.

This is because ticks do not actually have a separate head, but only consist of a body that ends on one side in the so-called “Gnathosoma” on which the mouth and feeding apparatus, the hypostome is located.

With the hypostome, the tick cuts into the skin and pushes its harpoon-like feeding tool ever deeper into the small wound. Barbs and a kind of adhesive that the tick produces firmly anchor the hypostome in the skin. This method of anchoring is quite effective, which is why the tick’s bite tool often breaks when it is pulled out.

So if a small black dot remains in the wound after the tick has been pulled out, it is not the head but only the hypostome.

How to remove a tick head that broke off?

If a part of the tick breaks off and is stuck in the skin, the possibilities are limited:

Remove The Stuck Tick Mouthpart Yourself

If you need to remove the tick’s head or more precisely the stuck mouth part, you can proceed in the same way as when removing a wood splinter. As a tool, you need a needle or high-quality fine-tipped tweezers.  Before use, clean and disinfect them with rubbing alcohol or alcohol swabs. Clean and disinfect the bite site too.

Try to grasp the stuck part at the upper end with tweezers and carefully pull it out. If the object is too deeply embedded in the skin, you could try to push it outwards a little with the needle until there is “enough” to grab it with the tweezers. With a little luck and patience, you may be able to get it out. Once it’s out, disinfect the wound again and cover it with a band-aid.

Keep in mind that poking around in the wound and possibly enlarging it just to dig out the mouthparts, will increase the risk of wound infection!

So if you are not sure or do not know how to remove a wood splinter the other options may be better.

Wait Until The Body Rejects The Ticks Mouthpart By Itself.

In many cases, it is wise to only disinfect and cover the wound and then leave it alone and wait until the body repels the foreign body on its own.

As explained above, often the stuck part is not easy to grasp with tweezers and if the wound is enlarged with a needle, the risk of wound infection increases unnecessarily and in the worst case can lead to blood poisoning.

If you just wait, the skin usually will encapsulate the foreign body and slowly rejected it on its own. In some cases, there may be a small local purulent inflammation before the foreign body is rejected. Encapsulation and pus are the natural processes of the skin to reject foreign bodies. Depending on how deep a foreign body is stuck in the skin, this can take a few days.

Watch the wound closely, but otherwise, leave it alone, do not scratch, but keep it clean and covered.

Go And See Your Doctor To Get The Tick Head Out

If you are uncomfortable with these two options, or if you have been bitten in an area where there is a high risk of tick-transmitted diseases, or if you are simply afraid of complications, it is better to consult your family doctor.

Your doctor will examine the wound and decide whether to remove the foreign body or prescribe an ointment to help with rejection and healing.

Your doctor also knows about any tick-borne diseases in the area and what other precautionary measures need to be taken.

Can A Stuck Tick Head Or Mouth Part Transmit Diseases?

The dangerous pathogens are in the tick’s digestive tract. The sooner the tick is removed, the lower the risk that the pathogens from the intestines have already migrated into the wound. When feeding the tick regurgitates its stomach contents back into the wound. So in theory, it may well be that there are juices from intestines in the mouthparts of the tick, which could represent a further risk. But whether an exchange of the contents of the mouth part takes place when it is removed from the rest of the body, is not really clear. Experts believe that the transmission of dangerous pathogens through stuck mouthparts only is very low.

To not be troubled with tick removal and possibly torn off tick heads or mouthpart so often, it’s best to try to avoid tick bites in the first place. Repelling ticks and preventing tick bites works best when you wear appropriate clothing and use tick repellents.

Despite all the precautionary measures, tick bites cannot be completely avoided. If you are bitten, it is important to remove the tick promptly. However, keep calm and carefully remove the tick with a suitable tick removal tool.