Not everything that looks like a tick is a tick! There are a lot of other small insects that may be mistaken for ticks. Especially the very small tick larvae may easily look like some tiny beetles or freshly hatched spiders. How do you tell these tick lookalikes apart from real ticks?

It is much easier to recognize the large adult ticks as such. After a meal, when they’re fully engorged on blood, then ticks are easy to tell by their swollen pea-sized brownish-grey body, with a tiny lance-like mouthpart, and four tiny pairs of legs protruding. But let’s get back to the larvae or the nymphs are easily confused with tick lookalikes.

Ticks Are Not Insects

To distinguish ticks from insects and bugs that look like ticks but aren’t any, it helps to know the characteristics of ticks.

A tick differs, on closer inspection, quite clearly from an insect. But at a cursory glance, it might be easy to get confused.

So if you see something crawling on your skin that looks like a tick then you better take a closer look, often it is not a tick but just a bug resembling a tick.

On closer inspection, most insects are clearly evident in their three main body parts: the head, thorax, and abdomen, as well as two antennae attached to their heads, 6 legs attached to the thorax. Most adult insects have membranous wings, but in beetles, they are not always easily visible.

However, one has to admit, that recognizing the body segments of a beetle can be quite difficult. The separation between head, thorax, and abdomen is difficult to recognize in beetles, so especially small, rounded beetles are easy to confuse. Elongated beetles or wasps, flies are rarely confused with ticks.

Here are some of the common tick lookalikes that, if you don’t look closely, can easily be confused with the spider-like parasites.

The spider mites (Tetranychidae) are a special suborder of mites found throughout the world. The Tetranychidae family includes over 1000 species that live on plants and feed on plant sap. Spider mites are found worldwide, they are harmless to humans.

Clover mites are extremely small, only a few millimeters in size. Their bodies are oval-shaped and reddish-brown, with many fine hairs. Normally they are found on the foliage of grasses, clover, or weeds. But they are considered pests to humans because they may invade homes during the fall months.

A completely different order of mites are the predatory mites, which also include the Red Mite (Dermanyssus gallinae) or chicken mite. This blood-sucking ectoparasite has spread worldwide as a highly invasive species and occurs on all continents. It normally affects all species of birds, but in the absence of such it occasionally also affects mammals and humans.

Stink bugs are a large family of insects with over 4000 different species occurring globally and many of them can easily be confused with ticks, especially the small stink bug larvae. Very common is the brown marmorated stink bug a shield-shaped striped insect with a brown body with lighter-colored bands across its abdomen, six legs, cream-colored antennae, and brown eyes.

All stink bugs will emit a very strong odor if picked up, pinched, or disturbed. The smell has been described as smelling like cilantro.

Most stink bugs are harmless to humans, but the brown marmorated stink bugs can cause great damage to crops by puncturing fruits with their beaks to feed on the juices inside. 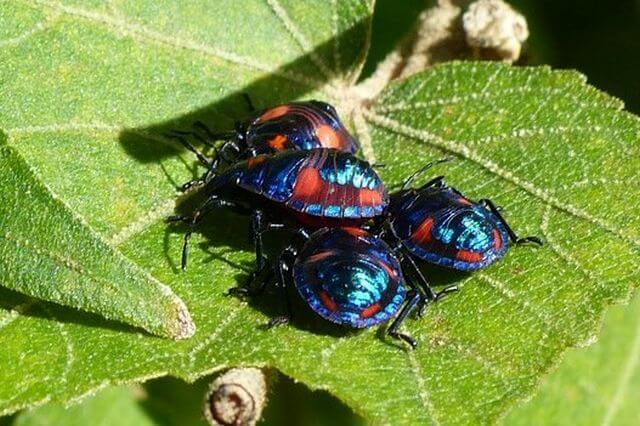 Harlequin bugs are now native to much of the United States, these are from Central and South America.

They are beautiful glossy golden orange bugs with black spots or splotches on them, hence the name Harlequin Cabbage Bug.

The bug is harmless to humans but can cause considerable damage to crops as they puncture plants with their proboscis and feed on plant sap.

Bed bugs are tick lookalikes that have one thing in common with ticks, they are ectoparasites that feed exclusively on blood. Bed bugs are reddish-brown, wingless, approximately 1/4 of an inch in length, and can live several months without food.

Bed bugs are attracted to their hosts primarily by carbon dioxide, secondarily by body heat, and probably also from other metabolites emitted by warm-blooded animals.

The term “bed bug” typically refers to the species Cimex lectularius, the most common as it prefers to feed on human blood.

Other Cimex species specialize in other animals, e.g., bat bugs, such as Cimex pipistrelle (Europe), Cimex pilosellus (western US), and Cimex.

Fleas are small wingless insects. The blood-sucking ectoparasites are tiny only about two to four millimeters long and brown to black in color.

They have a flattened body with six legs, the rear pair of which are extremely powerful, enabling the animals to jump very far.

There are over 2000 different species of fleas, many of which are specialized on specific hosts.

After feeding, an engorged flea may appear darker in color and about double in size. Adult fleas are found on their hosts from which they obtain blood.

Amongst the beetles that look like ticks is the shiny spider beetle (Gibbium aequinoctiale). These tick lookalikes are widespread in North America. They likely got their name because of their spider-like appearance.

The adult beetles are just 1/10th of an inch in size and have a globose dark reddish-brown to the black spherical body.

The beetle, which can easily be mistaken for a tick, is harmless to humans. It is a scavenger that feeds on other dead insects and organic material.

Spider bugs can become a problem when they infest their homes. All they need is to find enough organic food sources e.g. in a kitchen where you neglect kitchen hygiene and waste disposal then they can multiply extremely

Bog beetles (Sphaerius) is a genus of beetles that look a lot like ticks. The beetle’s body is convex, shiny, dark brown or black. The beetle is tiny, only a 25th of an inch, but that’s why it could be mistaken for a tick larva. The name bog beetle probably comes from the fact that the species is found in wetlands near the edges of streams and rivers where they feed on algae. These beetles are also harmless to humans, they mainly feed on algae. Three species are common in the United States.

Carpet beetles are usually dark brown, shiny bugs with oval-shaped bodies and six legs. They have small hairs on their underbodies as well as two antennae.

Bean beetles look a lot like carpet beetles, but they do not have the hair that carpet beetles have on their bodies. The bean beetle is also dark brown like the carpet beetle, but it does not appear to be as shiny. They have six legs and two very small antennae, similar to the tick’s antennae.

There are a lot of tick lookalikes out there

This list of tick-like appearing creatures is actually endless but most are not ticks at all. There are millions of insects and it all depends on how close a look you take and whether you want to see similarities. While at first glance many creatures look like a tick, it turns out to be something else. The insect world is interesting in species variety, most live in hidden worlds. You don’t have to be alarmed when a crawling animal looks so similar to a tick.

Most are harmless and people have nothing to fear from tick lookalikes. There’s no reason to grab a can of bug spray and make the little crawler disappear in a cloud of mist.