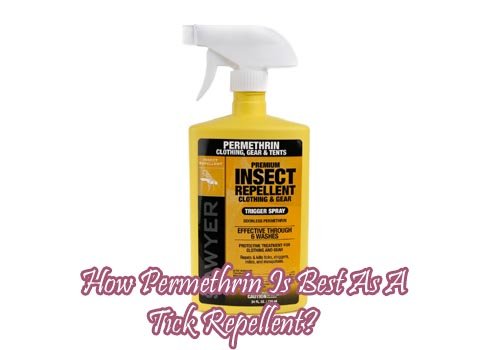 Permethrin is an antiparasitic agent, it is a synthetically produced substance that is similar in chemical structure to pyrethrin which is found naturally in chrysanthemum flowers.

Permethrin is highly toxic to insects and mites. “Mites” are a subclass of spiders (arachnids) that ticks belong to.

The substance is used for a wide range of applications, for example, it is used in the treatment of scabies, head and pubic lice. It is also sprayed on clothing, mosquito nets, and outdoor gear where it is very effective as a bug repellent.

When used as recommended, permethrin tick repellent is harmless to most mammals, birds, and humans.

What is Permethrin Tick Repellent?

Permethrin is the active ingredient in many insecticides and acaricides used to kill and repel insects and mites.

Originally Permethrin was derived from the flowers of the pyrethrum plant. Today it is synthetically produced and used in many veterinary drugs, pesticides, and other substances to control insects. Creams containing Permethrin are commonly used to treat scabies and their eggs. It is generally considered safe when used as recommended. In very high doses it can be harmful.

How does Permethrin work?

Permethrin damages the nervous system of insects and arachnids that come in contact with it. It blocks the nerve impulses and leads to paralysis and death of the bug.

Insects absorb permethrin over their body surface. It then quickly spreads through the insect body. Acting as a neurotoxin it causes the insect’s nerves to “fire off” uncontrollable nerve impulses, which lead to paralysis. Death occurs after some time.

This effect where the insect is immobilized within a few minutes is called the “knock-down effect“.

The problem with permethrin is that it also acts on beneficial insects, such as bees.

Permethrin, Good For Land, But Not For Water

As “harmless” as Permethrin tick repellent is to most mammals, birds, and humans when the recommended quantity is observed, so dangerous it can be for some.

Permethrin is highly toxic to aquatic organisms it harms fish and aquatic creatures such as amphibians and reptiles. Care must be taken when near water resources as Permethrin must not get into the water!

It is also highly toxic to cats and must not be used on felines. Permethrin poisoning can be life-threatening to cats.

Permethrin insecticide kills ticks that get in contact with surfaces that have been treated with Permethrin.

Permethrin can be also directly applied to the fabrics. DEET is applied directly to the skin and should be reapplied on a regular basis for its constant working capability. Permethrin when applied to a surface, dries off quickly and works effectively for over a week when applied to the clothes.
In the case of nylon fabric materials, DEET damages the fabric whereas, Permethrin is suitable for all kinds of clothing fibers.

Permethrin that is sprayed on clothing will dry off without leaving any odor or stains. It provides effective protection against ticks. Even after several weeks it still kills. It is the best form of safeguarding people from ticks as it has no contact with the human skin.

Permethrin spray is an effective and long-lasting surface treatment for clothing. It is used on outdoor clothing and by the military sector to control ticks and provide protection from tick-transmitted diseases.
Comparing it to other insect repellents Permethrin provides effective protection against ticks and other blood-sucking insects such as mosquitos and sandflies.